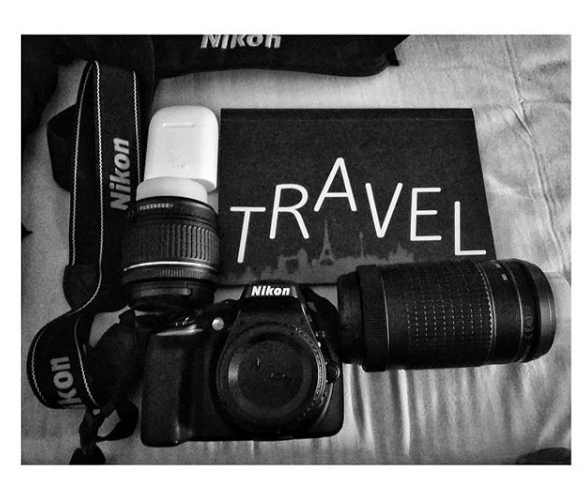 Udaipur is known as the “City of Lakes”, comes under the category of a 2-3 days tour with friends and family.

I recently visited this beautiful city in Rajasthan which is famous for its lakes and calm surrounding. As a traveler, I always try to explore things which are the very soul part of How and Why the place is so beautiful. I traveled with a bunch of my friends and we planned a few things before visiting.

Since we knew we were only going to be there for 2 days and From Delhi it takes 14 hours to reach Udaipur, We planned the very basic things.

While browsing the internet, we found this great place to stay in Udaipur, it’s a hostel called “Zostel”. It’s very famous and It’s pretty affordable too.

-Rooftop restaurant with an amazing view of Udaipur city.

– I would advise you to eat from outside and try out the amazing thalis local to UDAIPUR.

-The service is pretty good there.

-You would surely enjoy your visit there if you are going there with a group of friends or family.
-For Bunker Bed Rooms, It costs approx 400-500 INR per day and trust me, it’s worth it. You’ll enjoy.

-You can also get private rooms and obviously, the charges will vary accordingly.

-You can also play games like Pool, Jenga and a lot of other fun indoor activities to pass your time.

We reached around 2 pm and from there we decided to go on a trek that lead us to the highest peak points in Udaipur.

On the way, I noticed a guy cleaning algae out of the lake and that was the moment I realized that without them, the city won’t ever be famous for its title- “City of Lakes”. 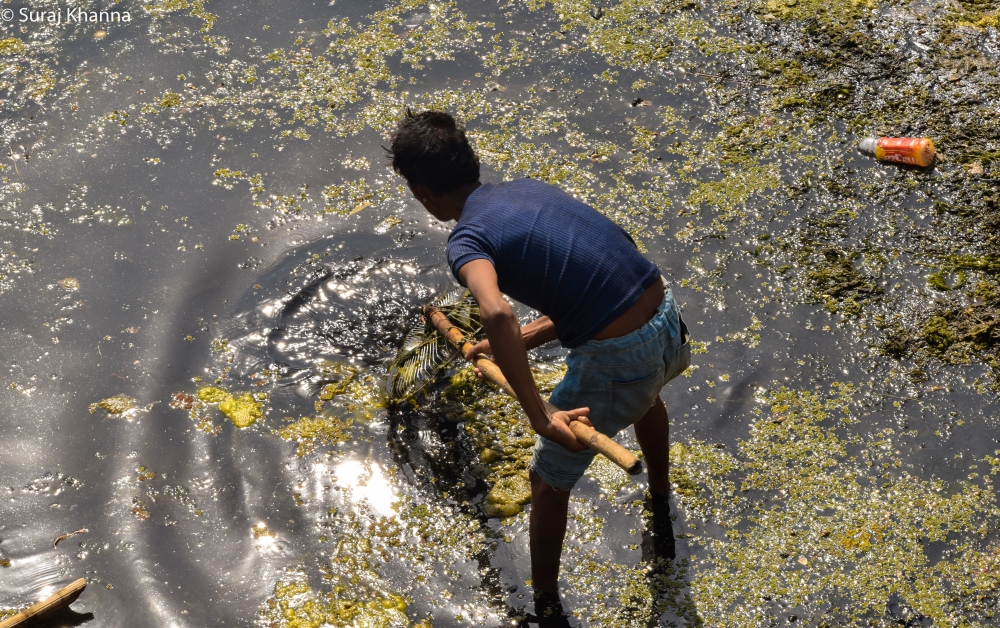 The long trek leads us to the “Sunset Point” which was mesmerizing!

After coming back from the trek, it was tiring and it charged us around 150 per person in local autos for the round trip. After all, what’s better than exploring an unknown city if not in the form of the locals itself? 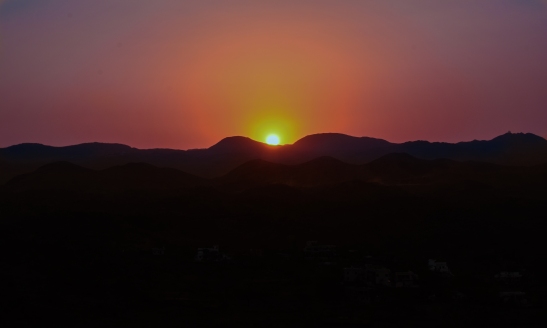 For dinner, we decided to visit a local cafe near our Zostel. It had a “pop ambiance”, wooden interiors, was filled with miniature monuments and palaces of Udaipur and local artisan’s astonishing works along with mouth-watering delicacies.

I had lunch in the “Khamma Ghani” restaurant which is famous for its view and the food was really good. It was a bit expensive than usual but the food was worth the money.

Then we explored the famous local market of Udaipur “Jagdish Chowk” where you can check out the amazing art and craft produced by the local weavers and also buy them as souvenirs.

On the way, we decided to visit The City Palace which is very famous in Udaipur. It was built over a period of nearly 400 years, with contributions from several rulers of the Mewar dynasty. The Palace is located on the east banks of Lake Pichola.

Here are a few breathtaking pictures of the Royal Palace. 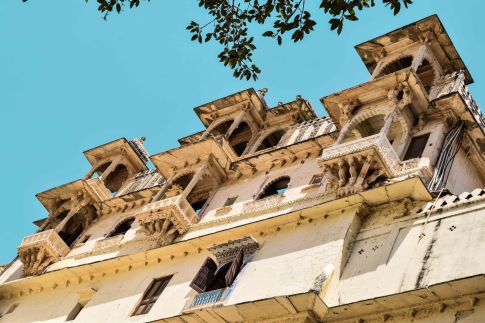 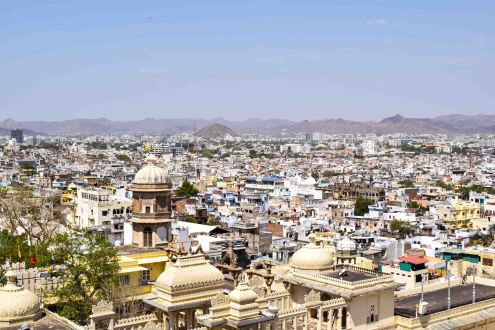 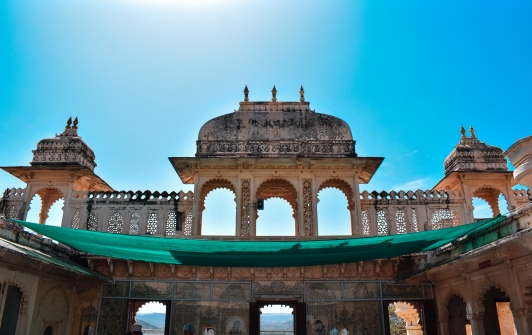 The palace covers a wide range of distance and is considered the largest of its type in RAJASTHAN. It’s a huge palace and it takes time to cover the whole area and know about the palace but, if you’re a person who would like to know all about the historic journey, then its just the right place for you. Even if you’re not, it comes under a must-visit category because the view looks serene and there’s an artificial Island made on the lake (A cherry on top for tourists and travellers) where the super hit movie “Yeh Jawaani Hai Deewani” was shot. The view looks as majestic as the palace itself.

Then we visited the place called ” Saheliyon ki Bari”

It lies in the northern part of the city and has fountains and kiosks, a lotus pool and marble elephants. It was built by Rana Sangram Singh. 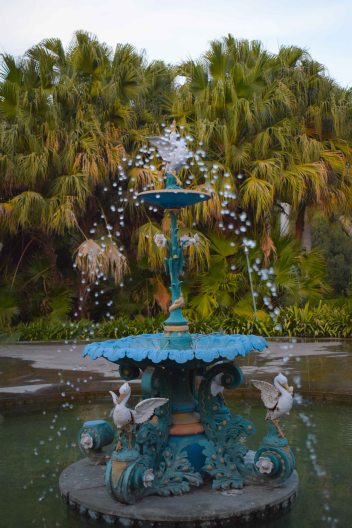 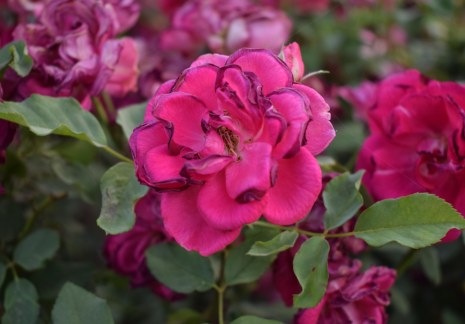 Later in the evening, we decided the go boating in the very famous “Fateh Sagar Lake.”

You don’t wanna miss this. It costs 220 INR per person and its better if you go at around 6 pm in the evening when the water is cold and the place is lit up, everything looks so amazing and you would surely get the answer to your question, “WHY IS UDAIPUR CALLED THE CITY OF LAKES?” Well, it did answer mine. The view out there was just so astounding and tranquil. 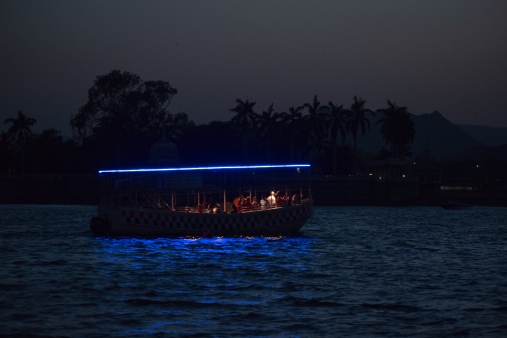 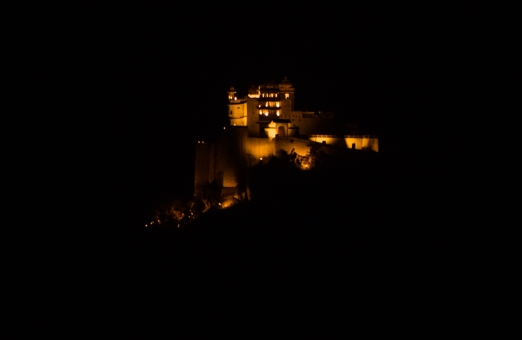 Later in the night, we had local food and then went back to our zostel.

We stayed up the entire time as it was our last night and we decided to play a few games and enjoy the view on the rooftop.

We all decided to visit the very famous market called “Elephant Market” where you can buy souvenirs from. On our way we visited and explored a few markets around.

The weird fact is what the locals told me when I asked them about why is this placed The Elephant Market and the only reply they gave me because there is a painting of an elephant on the wall and that is how the name came up. Honestly? It kinda made me feel disappointed. I expected something like a story of royalty which goes way back but, anyway!

Himalayan Escapes For A Perfect Summer

Things to do in Goa

The Monastries of Spiti

A Trip To Kalpa, A Scenic Village In The Indian Himalayas

Best Places to Visit for Honeymoon in India