Agra, the city where the pride of India resides. Yes, the great city where Taj Mahal is located is Agra. It is one of the seven wonders of the world and puts us upon the world map.

But, it also boasts of various other beautiful structures along with the majestic Taj mahal. Agra is also known for its innumerable palaces and temples along with old tombs. Housing various different cultures, it is also a food hub. Let us plunge into this listing of the things you can do while in Agra.

One of the obvious and most relevant reasons to visit Agra, this white beauty is a once in a lifetime experience. The palace stands in the middle of a large area with a garden adorning the front.

Originally built as a tomb to honour his timeless love for his wife Mumtaz, Emperor Shah jahan is said to have spent huge sums of money to build this place. Boasting of sparkling white marble, it looks extremely beautiful at night. The four minarets have intricate work done on them which defines its beauty.

2. Take a stroll in the Agra fort

Built by one of the greatest emperors in India, it is a relish of Mughal architecture. Emperor Akbar had commissioned to build this humongous structure in 1565 and yet it still stands tall.

Inside the fort is a huge palace, a mosque and various halls to look at. Take a leisurely walk inside and make sure you notice all the detailed craftsmanship of this fort made of red sandstone.

This well planned city was way ahead of its times when it is used to serve as a capital for the Mughal empire. Famous for the Jama masjid here, it is a marvel of the Indian style of architecture during Mughal period. 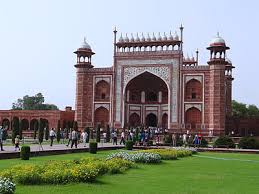 It is considered as a UNESCO world Heritage site because of the various palaces, mosques, harems and other cultural significant pieces built here. Moreover it is still having three of its walls intact from those times. Also, make sure to take a look at the grand Buland Darwaza.

This riverfront terrace garden was built by the emperor Babur. It means Moonlit garden and is a delight to watch at night. It is very near to the Taj mahal and so can be covered in the tour easily.

With an octagonal shape, it also has small tombs built inside. The true beauty and grandeur can be experienced during the evening or night when the moon rays hit the lush green lawns here.

5. Gaze at the Sheesh mahal

Just as the name suggests it is indeed a palace of mirrors. Filled with ornate glasses and mirrors it is a spectacular site to watch. It looks like a jewel when the sunlight falls on it. 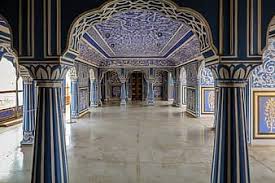 It is amde of white marble and then the mirror work has been in laid into it.There are beautiful jharokhas which adorn the archways. Crystals and other beautiful glass chandeliers can also be seen.

A haven for non vegetarians , find all kebabs that you can think of here in Sadar bazzar. Galouti kebabs, tandoori chicken, malai tikka, you name it and they have it.

Also enjoy mouth watering chat like aloo tikkis and ragda patties in these streets. So, vegetarians do not despair when the Chaat is here. Do not forget to savour the famous sweet which is Agra ka Petha as well.

All those who crave shopping and want to take back some typical Agra souvenirs should definitely visit this Bazaar in Agra. Filled with various relics and small pieces of art, you cn gift all your friends and relatives a token without putting much strain on your budget.

There are also haats selling many traditional pieces of clothing like Salwar Kmeez, Lehengas, Kurtis and sherwanis. These are delicately embossed with beautiful and intricate Zardosi work . Other Bazaars to visit are Kinari Bazaar and Shah market .

Agra is truly a city of great history and culture. Other than the ones listed above there are multiple tourist attractions of various other tombs like Itma-Ud-daulah’s tomb, Chini ka Rauza, Sikandra’s tomb and Mariyam’s tomb . There are also gardens like Ram Bagh and Mehran Bagh.

With so much heritage and charm, this rustic old city is sure to steal your heart. And your tastebuds are also going to thank you for treating them to some scrumptious, typical Desi dishes. So, what are you waiting for? Plan a trip soon!

Things To Know Before Our First Backpacking Trip

A Day-Trip To Sonmarg Reveals The Beauty Of Kashmir

5 Things one can do in Andaman and Nicobar

Temples In Jodhpur For A Divine Holiday In The Blue City

9 Camping Mistakes You Must Avoid