Offbeat Things To Do in Paros

As we saw in the top 8 places of Paros, it is a place of beaches and sunshine. It has a rich culture. But how about exploring some offbeat places in Paros too? Won’t it be fun?

This list below is some great and fun things to do while on this beautiful island in Greece. Read on to get snippets about the adventures ahead.

Sample some seafood at Piso Livadi

Piso Livadi is a fishing port located in the southeast part of the island. It is small in size but bustling with a variety of sea fare.

Many cute little taverns have popped up nearby this port serving delicious Greek seafood. From mussels to trout to crabs and lobsters, all fish lovers are in for a treat!

Another important point is that it acts as the central port linking Paros to Antiparos and other Cyclades islands around it. So, you can visit this port, have some food, and then set sail further.

A fishing village located in the North of Paros and easily one of the most popular tourist destinations here. It is located near the Venetian Fort which stands tall and guards this port.

The Venetian Fort is also a major tourist attraction. Explore this monolithic structure built by The Ottomans to safeguard this important port in olden times. Its specialty is a tower built in with firing positions to ward off enemy attacks.

The scene of the watersides and quarry looks straight out of a postcard and makes us revel in its natural beauty. There are lots of restaurants lines up nearby which serve authentic cuisine too.

Moreover, if you want to enjoy some real beachy nightlife then this is the place! It converts from the cute little daydream into the ultimate party town at night where you can drink your sorrows away as you groove!

Learn about winemaking at the Moraitis Winery

Greece is most often associated with wine and champagnes and so won’t it be exciting actually witnessing its making.

Winemaking in Greece is as old as time itself. It dates back to medieval times and is practiced even today. The Moraitis Winery was established in 1910 and has retained all the old principles of winemaking.

The grapes used are sourced from their own vineyards and are endemic species of Paros. They are then brewed in ancient machinery to churn out the perfect red wine.

The village of Ambelas is nestled in a quiet spot near Naoussa. It is also located just 15 minutes away and a great spot to relax and unwind.

You can go for a nice family picnic near the shores of the waters. Pack a big fat lunch of sandwiches, colas, and some swimwear, and you are set. Have a nice refreshing swim in the calm currents and then sit and have a nice appetizing lunch under the shade of the trees.

There is also a great restaurant nearby where you can dine in or take out some great ricotta or blue cheese Greek sandwiches along with some fine red wine.

Yes, you read that right! Paros is a great cultural hub along with its many other quirks. The people here celebrate any religious festivals and enjoy their hearts out.

The pirate festival is one such quirky festival held usually in August. It is in remembrance to the locals who had fought and won against the Turkish pirates who had raided them.

The festivities ensue with young boys dressing up as pirates and creating mischief. It is then followed by fireworks and merry feasting while dancing till the wee hours of the night.

Watch a movie at Paros Park

The open-air cinema in Paros Park is known for screening many delightful Greek classics. Experience sitting in an amphitheater and watching a movie as the cool breeze caresses your head, not some artificially blasted AC air. The best part is it is free! 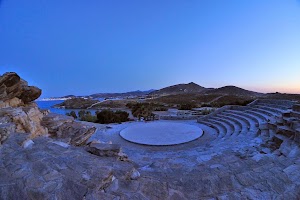 You can also have a little trail walking and trekking in its rocks and caves. There is also a lighthouse constructed nearby.

The garden remains in full bloom and has all the endemic wild species of flowers and herbs growing there in full glory.

Bored of the normal everyday grind of life? This summertime is your excuse to ditch the monotony of 9 to 5 lifestyles and head for a...

How to Pose in Travel Photos Naturally and Creatively!

Have you ever wondered how to recreate the quality images poses as you see on social media? If you love travel images however have ever...